Mil-tek Denmark A/S has spent 27 years delivering environmentally friendly waste solutions around the world. Number 50,000 is now on its way... 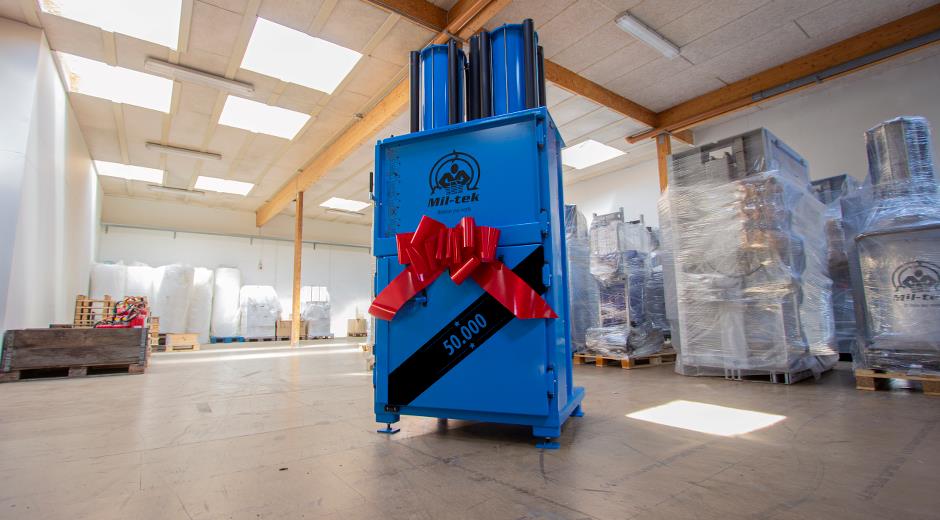 For 27 years, Mil-tek Denmark A/S has been delivering waste reducing and recycling solutions in the form of balers and compactors to a wide range of different industry sectors around the world.

Now, a truly significant milestone has been reached: the production and shipping of Mil-tek machine number 50,000.

Over the years, the business has expanded to now be active in 25 markets around the world. From localised bases in the US and Mexico in the west, right across Europe and the Middle East to Australia and New Zealand in the east, Mil-tek has delivered solutions to more than 80 countries over the past 27 years.

While Mil-tek celebrates reaching machine number 50,000, there will be many reasons to celebrate, but one crucial one must be the fact that around the world packaging such as cardboard and plastic has become a resource rather than waste to be disposed of. Environmental concern, combined with a simple solution that requires nothing more than compressed air, has proved to be good business.

But Mil-tek wants to provide more than just the solution - that's why Mil-tek also offers to make Co2 calculations for customers in order for them to map how much Co2 savings they can expect to make by replacing the traditional waste containers with a Mil-tek solution. For Mil-tek's 25th anniversary in 2017, conservative calculations revealed that the many Mil-tek solutions worldwide at that time had resulted in savings in excess of 2.5 million tons of Co2.

Something that Mil-tek, and owner Kristian Skannerup is proud of, but does not spend time boasting about. For, as he says, "It's nice to help make a difference, and we're proud that we can help future generations hopefully also inherit a healthy world to live in, but at the same time, we must recognize that it's just a drop in the ocean. We can and must do much more to ensure the world we live in continues to thrive."

This is one of the many reasons why Mil-tek has continuously expanded its product range in order to handle a wide variety of different types of waste such as cardboard, plastic, mixed waste, cans and polystyrene among others.

Recently, 8 new products have recently been added to the range to offer even more tailor-made waste solutions to meet the requirements of a growing base of customers, varying widely in size and industry.

About Your Private Data

By submitting a form on this website, you are requesting for Mil-tek to contact you directly. Your personal information will be kept securely and remain private.

Should you wish to opt-out from all future communications, please contact a Mil-tek representative or click here